Blog The search for a deployment service

The search for a deployment service

In my quest to setup an automatic deployment solution for a website built with Grav, I've already established the Grav git-sync plugin wasn't exactly suiting my needs. I've made a lot of research since and I'm surprise to see very few solution out there, not just for Grav, but for post-commit scripts and Webhooks in general.

Basically, what I need is something that will update the files on my productions servers every time a new commit is pushed to GitHub : 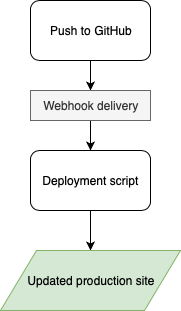 The reality is you need an endpoint on our server to receive the hook. Moreover, this endpoint needs to be reachable through a public facing URL. This is where it gets difficult, because there is not a lot of documentation or "all in one" package to handle that.

The most popular result when searching for a git hook deployment solution involve a bare git repository and post-receive hook on the production server. However, while this method is the easiest to implement, it's not automatic and can't be directly called by GitHub Webhook API. The only way this could be used in an automated way would be to use Travis CI to push to the production server after a successful test.

Other popular results either are 6 years old, doesn't offer great script support, offers only 1 repo for free, offers only a 10 days free trial, include a huge security vulnerability, looks overly complicated, is just a pile of spaghetti code or doesn't handle the public url. One result was close, but it contained a web accessible UI which I didn't looked too secure at first glance.

The Github documentation point to Sinatra, a ruby application used to quickly creating web applications. Unfortunately, Sinatra is more oriented to localhost use, not as a daemon on a production server.

This means there is a need for a new self hosted one click deployment solution. Or is it ?

Writing my own service

At this point I considered creating my own deployment app. Question is, what does a good deployment app do? How does it work? And what would it look like if I wrote it? Let's make a list:

So there we are. A CLI app, written using Symfony marvelous Console Component, and capable of deploying your code, with a front facing URL to handle the receiving hook request !

But wait, something doesn't add up. If this app can be loaded by Composer into an existing project, how can it handle the public facing URL? Even if loaded globally, this still requires additional setup for the Apache/Nginx vhost. Maybe using Composer create-project command could be of use?

Or maybe this wishlist, the very concept of a deployment script and my perception of what it is... is wrong...?

The more I was thinking about this issue and the more research I did, the more I realized my concept of deployment was wrong. The concept of a deployment script can't be the same thing as a webhook endpoint.

Looking closely at the wishlist, one thing is clear : a deployment script won't ever be able to satisfy all those demands, because some of those demands are not compatible with each other!

We can't have a public URL handled outside the code we want to deploy, and still have the deploy script inside at the same time! For this part, there no other way around : We need a dedicated Apache / Nginx vhost. The only other way for an external service (aka GitHub) to ping our server would be with an SSH connection. This could technically be done by using a CI service like Travis. However, even if we end up using a service like Travis to ping our production server, we still need a robust script to handle the deployment procedure...

This only means one thing. My perception was wrong. It's a two men job, it requires two parts: The deployment script and the Webhook endpoint :

Now that we established that, some of the potential candidates starts to make sense. Maybe some of them could be useful after all...

This one looks like a non brainer. The Deployer app is literally A deployment tool for PHP.

My first thought when I came across this app was it couldn't handle the automatic hook portion. This is because Deployer is meant to be run from a deployment machine (aka your computer), not the production server itself. But I don't think it would be too complicated to use make the production server deploy on itself. By doing so, we’ll essentially be running everything on the same machine (unless you have a dedicated deployment server, which is not my case).

Of course, now we can get into an infinite loop : How to do you deploy our deployment script? I think by adding your project specific deployment script to the project git itself, this should be covered. The only thing we need now is for something to trigger the build.

This one is a little more complicated. You have Webhook, a lightweight configurable tool written in Go, that allows you to easily create HTTP endpoints (hooks) on your server. On one side, Webhook requires you to install something on our server (not a big deal for a VPS), but, as per their Readme, it requires to be manually run and listen to a non standard port. This could be an issue, but nothing that can't be overcome with Apache's Mod_Proxy (since we'll need a dedicated vhost anyway).

Another way to trigger our Deployer deployment script would be to use Travis CI. Travis does offers some advantages. For example you could only trigger a deployment after a successful build / tests and you wouldn't need Webhook at all, so no dedicated Apache/Nginx Vhost either. On the other hand, Travis would require SSH access to our production server.

I think in the end it will depends on the use case. For Grav, there’s no building or testing phases, so we don't typically have Travis setup for a Grav app. For more complex app, for example one created with UserFrosting, I already have Travis up and running, so adding a deploy build phase could be better, plus I'm sure I won't deploy bad code if a test fails.

But one thing is sure : One or the other, they'll need to work with Deployer to achieve success. So here we have my current plan : 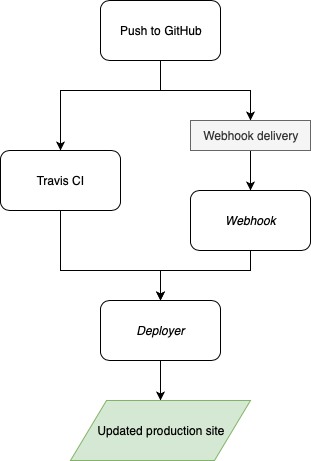 One thing is certain. This topic is not very well documented. Most references I found explains either one or the other. Automatic deployment doesn't seams to be a popular topic, probably because you need to have faith in your code not to break every time you push (that why we use automated testing, don't we?). It could also be because there's not a “one size fit all” solution...

But since we came across that "We didn't deployed documentation to the production server for the last six month!" on the UserFrosting team, I think automated deployment is something we should all look into. Fortunately, we now have tools that can make our lives easier. Gone are the days of the FTP! And if Deployer proves worthy of his reputation, I think the days of manually deploying on the production server by connecting to it through SSH are gonna be gone soon too, at last for me.

Fun fact, it's not the first time I toyed with automated deployment. When working on SimpsonsCity.com a couple years ago (around 2012-2013 maybe?), I did have a very public (and potentially very unsecured) spaghetti PHP script handling the deployment procedure. Navigate to an URL, enter your Htpasswd password, and you could see the whole git clone and such executed before your eyes. Ouch. It's funny how the same issue is still present today, but we now have more tools to handle it (and I do have more experience too) while still not having a definitive solution.

That being said, In the coming days I'll test out both Deployer and Webhook and I'll be sure to write a definitive guide once everything is setup !