For the pas couple of days, I've been searching for a way to automatically deploys two Grav based website when sending new commits to GitHub. So far, I determined I would be using Deployer.org for the actual file copying and other installation operations. Let's dig in in this first attempt to see what Deployer can do and if it will be able to answers my needs.

Setting up for testing

First, let's start by installing Deployer on my local machine. I'll use the phar archive method :

On MacOS, I had to add sudo to the second command, as my user didn't have permission to write to /usr/local/bin

For testing purposes, I wont be deploying to a production server just yet. Since I already have a shared Vagrant Homestead VM up and running, I'll try to deploy to this VM. I started by adding a new domain to my Vagrant config, tied to /home/vagrant/deployment/current path on the VM:

After reloading vagrant and adding the domain to my machine /etc/hosts, I now have a new host reachable at http://deployment.test with IP 192.168.10.10.

I'm now presented with a choice. Let's choose the Common type for now. Next it ask for the repo URL. I'll paste the Grav repo url from earlier : 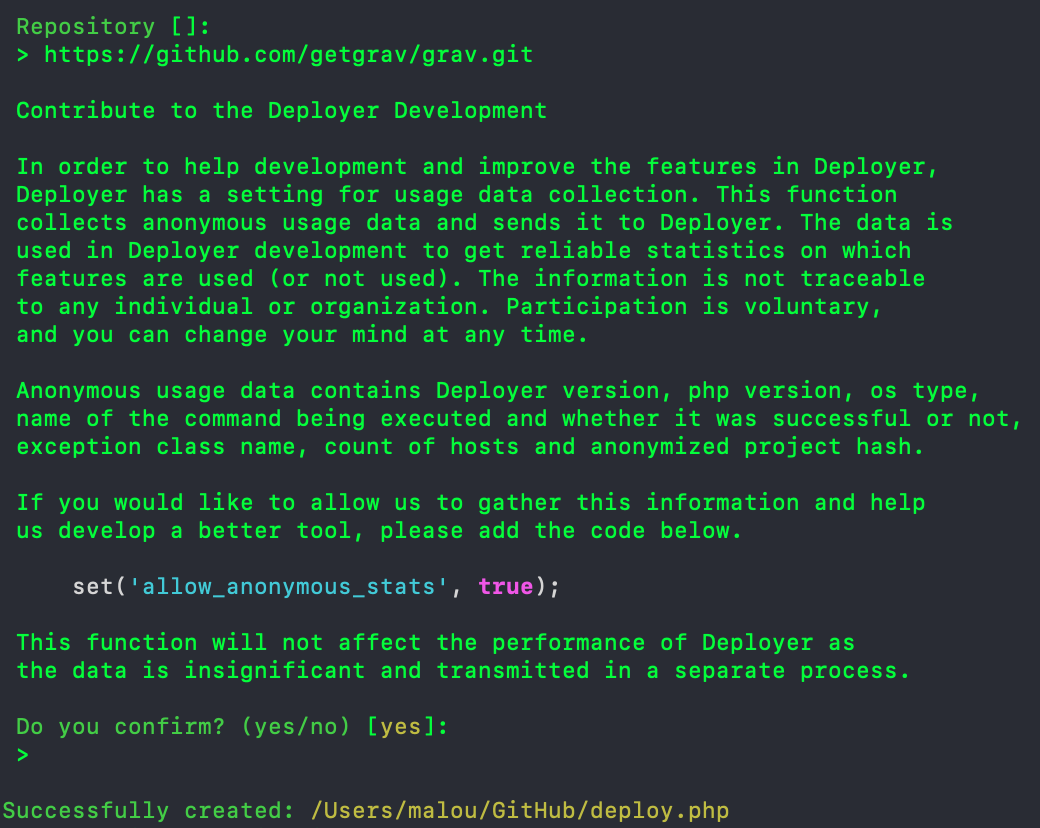 I now have a new default deploy.php file :

Setting up the host

Let's start by setting up the host to point to my Vagrant box :

I added the vagrant user instruction, since this user is already setup with public key for passwordless login.

Let run the deployment script to see what it does : 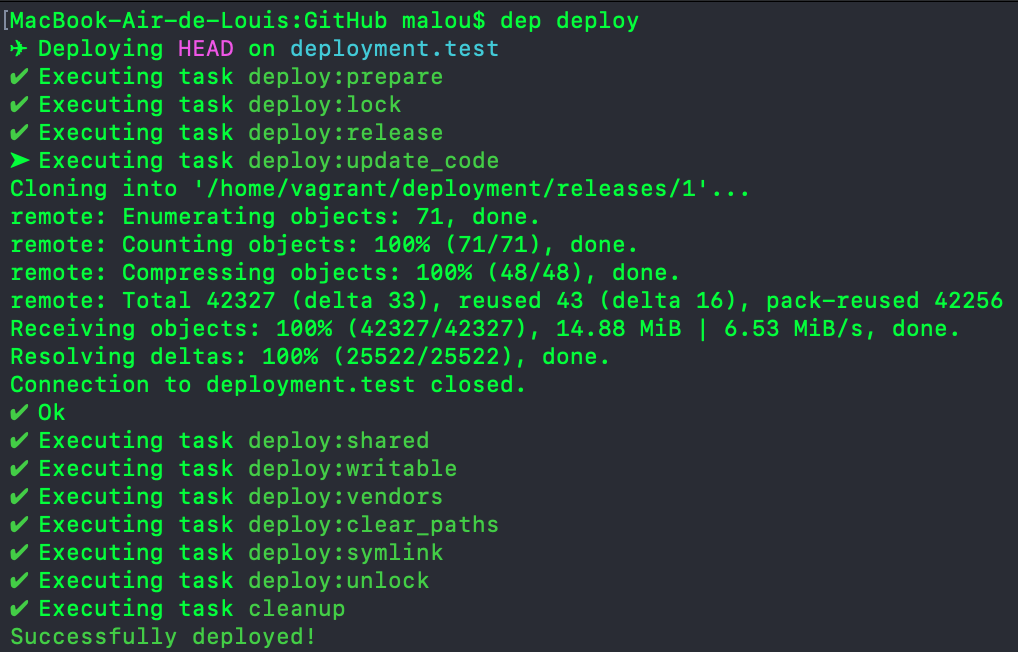 The result can be seen on the target server (the Vagrant box) : 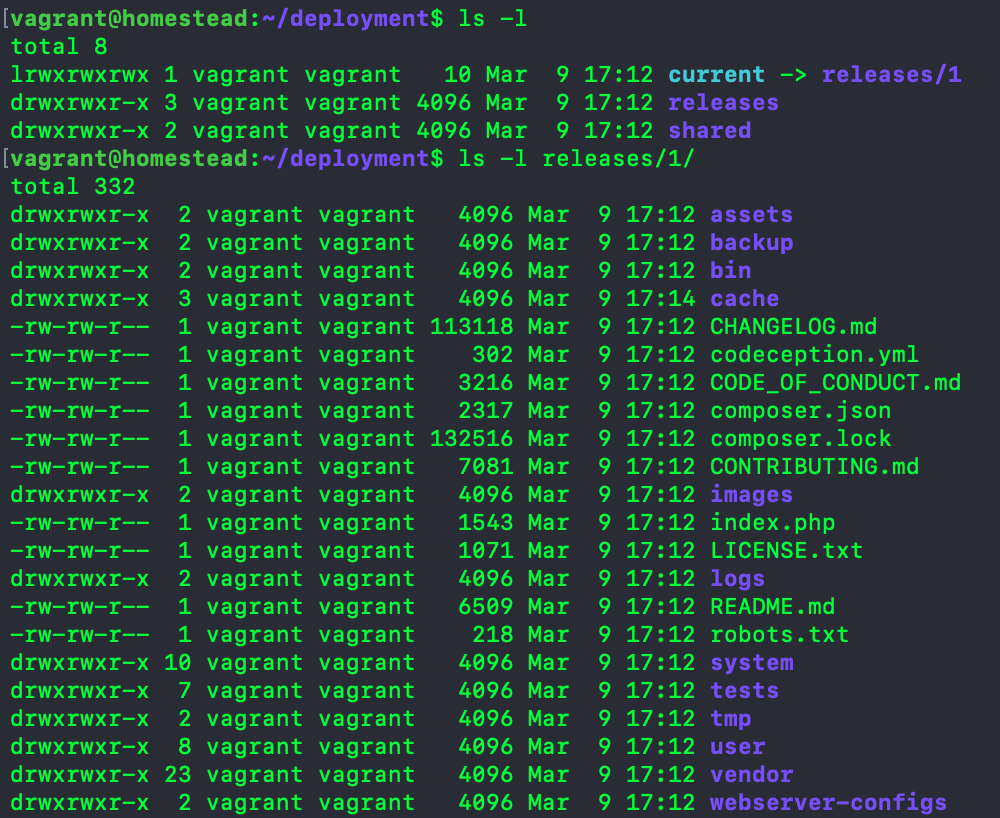 So basically, Deployer will clone the latest version of the code into releases/ each time deploy is run, with a symlink of the latest one to current/. See why I pointed the domain to /home/vagrant/deployment/current earlier?

Now if I go to http://deployment.test, I'll be greeted by this message :

To run the Grav installation script, we'll need to define a new task. Let's add this to our deploy.php.

We won't run the whole deploy just yet (we didn't even added it to deploy yet), we'll run this one task to make sure it works.

You can add verbosity (dep grav:install -vvv) to see the underlying process.

Let's see if our installation was a success : 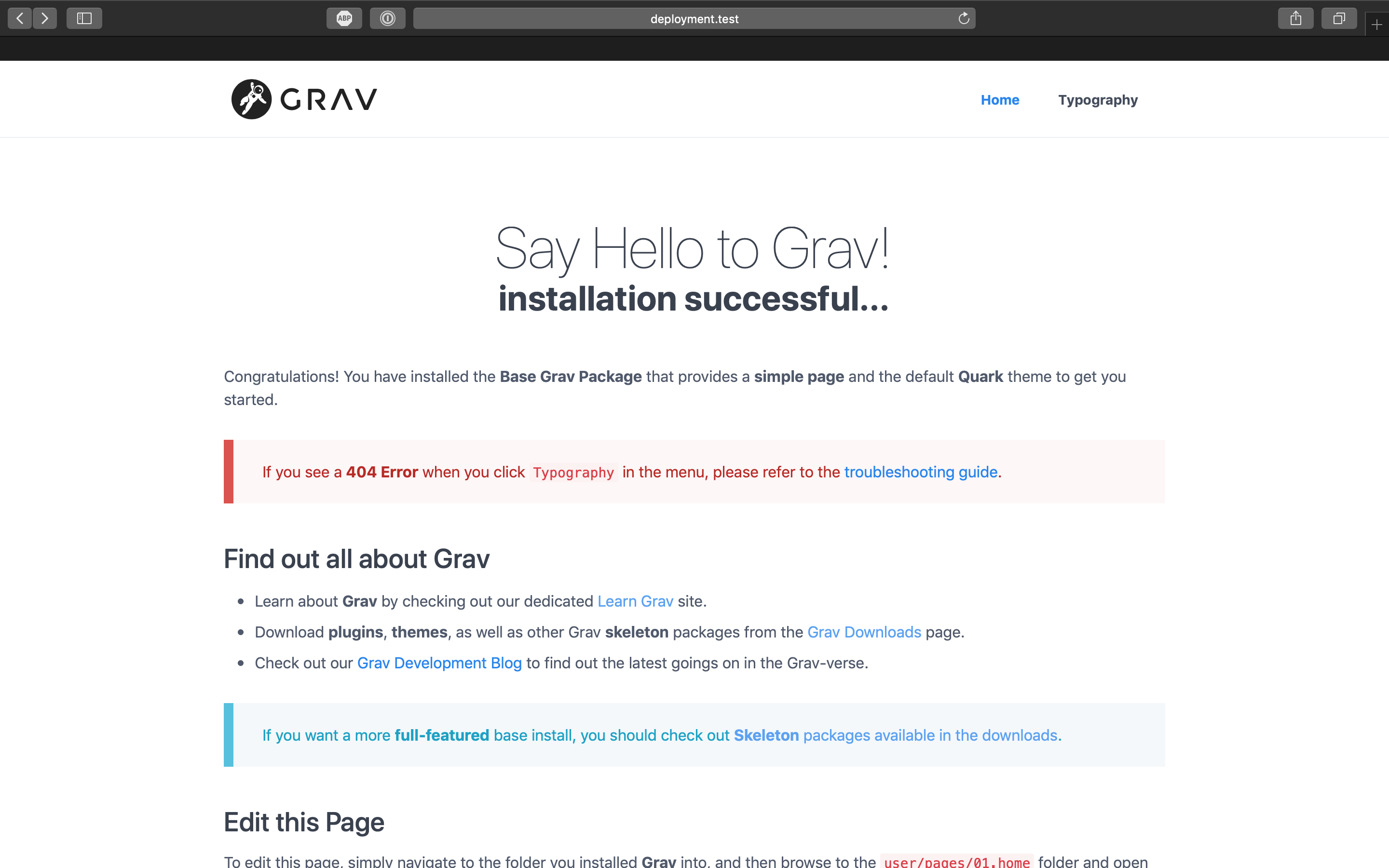 Now we only need to do is add my new custom task to the main deploy one. The deploy task actually bundle multiple sub task together. All those sub task are loaded from the common recipe bundle with Deployer (and loaded by the require 'recipe/common.php'; line at the top our the deploy.php file). You can learn about them here. I guess the right place to run the grav install command would be right after deploy:vendors. Let's add our new task : 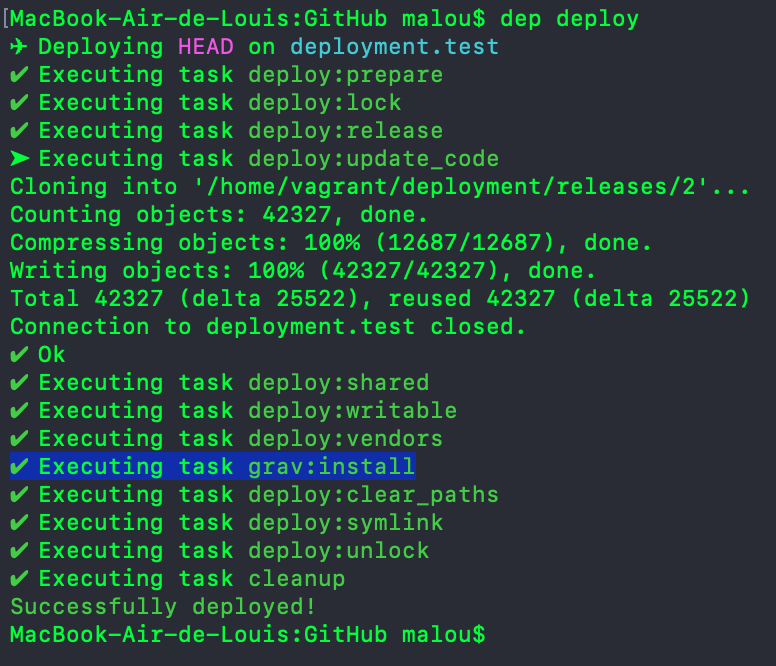 Here we can see our task successfully after after deploy:vendors just like I wanted !

Testing on the production server

Now it's time to try to deploy to my production server. I've already setup a new vhost on it (remember to point to current/), so let's dig in and edit the Host portion of the deploy.php file :

Here you can see I kept the VM host, but tagged it as development. The production server is tagged production. Deployer allows you to have as many hosts as you wants, and deploy to any one (or all) of them. Let's try deploying to the production server now (finger crossed) :

Even if the deployment script was a success, I had one small issue: a white page when I try go to the URL in my browser. A quick look into Apache logs revealed the problem. Something related to file permissions. Makes sense, as I login with my user (malou), but apache uses the www-data user.

To fix this issue, I can't simply add a task to change permissions, as even if everything is owned by malou, he can't chown the files without sudo. I could login as www-data instead of malou, but that could create a security issue. Finally, Deployer offers a writable_dirs options, which is a "List of dirs which must be writable for web server", but giving write permission to everything it's not exactly what I want.

Long story short, there's a couple ways of fixing this permission issue here, but it's usually a matter of giving the right permissions to the right users and group. I ended up fixing everything with the Solution 1 from this post. And to be fair, permissions can be a pain to manage even when deploying manually...

So now that this is fixed, I have my deployed Grav on my VPS ! 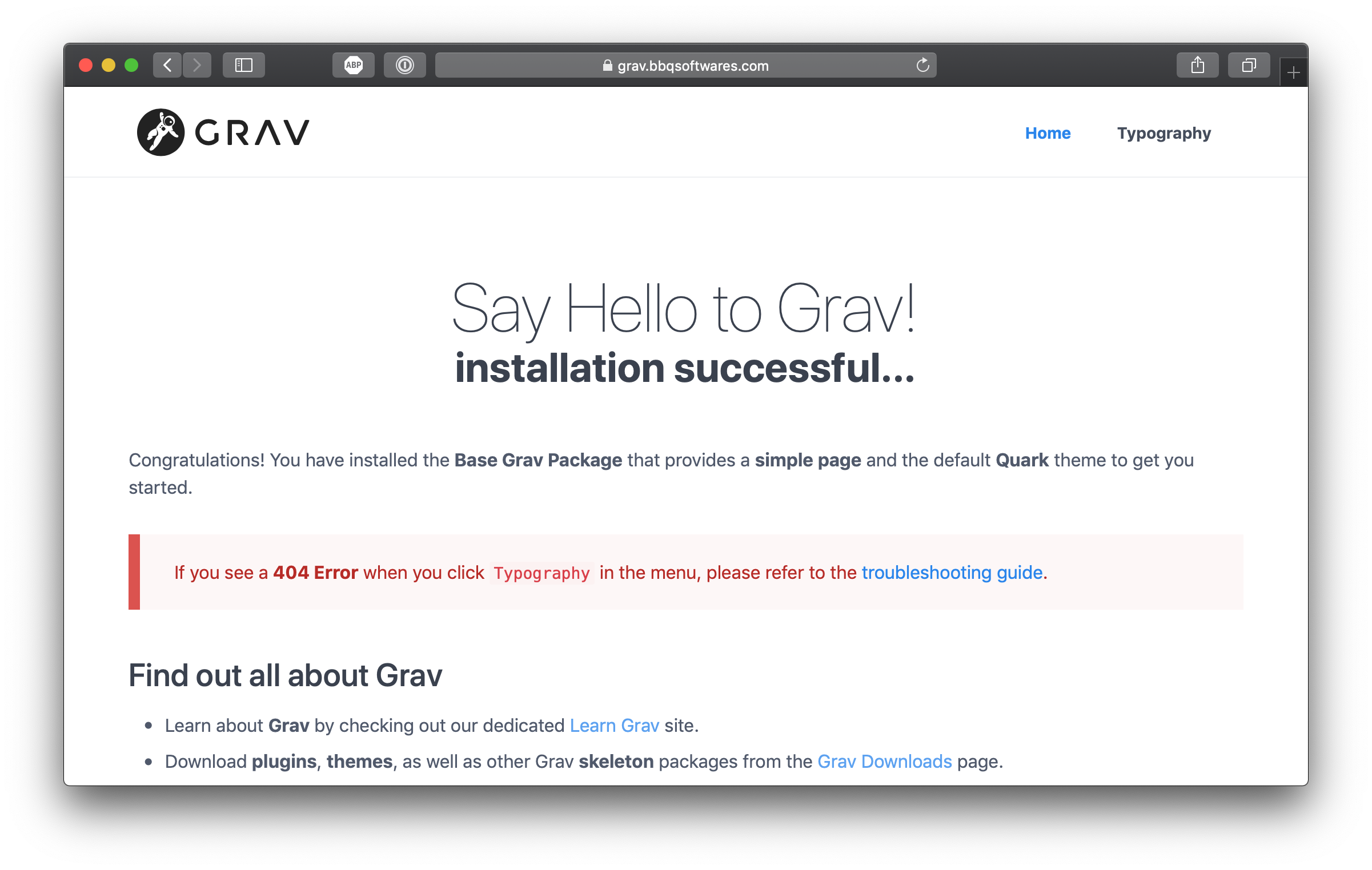 I must say, I'm pretty impressed so far by how Deployer works and is simple to use. When moving on to the real deal, I'll have to manage something clever to be able to deploy my actual Grav website, since I don't keep a copy of Grav itself in my repo. Same goes for UserFrosting based sites, which required UserFrosting to be cloned first, then the Sprinkles. However, if I had to guess, I would say it's only a matter of writing the correct tasks. Taking example of the base deploy:update_code task might prove helpful in the future.

Next up, I'll be trying Webhook. Once this is done, I'll finally be able to move on to setup full automated deploying of both my Grav based projects !